Elements That Make for a Great 3D Scene 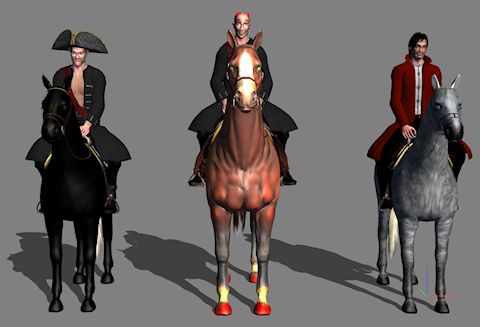 Tech and Trends:- When doing digital artwork, there are certain things that make for a good quality scene. I look for those elements when I view the works of others and I look for those in my own works as well.

Whenever I work on a new scene in my 3D programs, I shoot for different things. Those are certain things I believe help to create a good quality scene. Sometimes when I look at my old works, I cans see where I may have fallen short but, overall, I improve as time goes by. Let me discuss the different elements that I believe are important to consider.

Character poses: The first thing that you have to think about when you look at how your characters are posed is as to whether or not they look natural. If the poses don’t look natural, you need to go back to work on them until they do. Another thing is if your characters have body parts that penetrate the props , other parts of their own bodies or parts of another character’s body. There are times where I was tempted to take shortcuts but after viewing what they looked like after rendering the scene, I saw that it wouldn’t be likely that I’d get away with it. Not if I wanted to at least create a scene of decent quality.

The story behind the scene: They say a picture is worth a thousand words. But what are the thousand words you would use to describe the scene you are creating? That is the story behind the scene. Each scene you create should have a different story behind it or a different scenario. Sometimes it becomes difficult to come up with new ideas for scenes. I try to create different characters and think of a personality that each character would possess. Then I try to think of scenarios or situations they might get into. I also try to consider the relationships the characters have to each other. Then I would try to come up with scenarios matching that.

The lighting: a great scene is comprised of decent lighting and the use of some shadows. In my early works, I took the lazy way out and just used the default lighting. I would never try to get away with that now. I have since learned that good lighting can make for a quality scene. Too much lighting causes a scene to be washed out and too little makes it difficult to see certain elements of you scene with any real clarity. Where you aim your lights, the number of lights, the angles and the settings for the shadows are all the things you must consider. Often, I will work on one element at a time. I’ll start with an idea of what I want to happen in a scene. Then I build a set. Building a set could be as simple as loading one that is already built and you may not even have to move props around much. It could also consist of building your set one wall at a time. It depends upon what you are looking to achieve. Then you have to decide what portion of the set you are going to focus on. Maybe the corner of the room. Maybe the entire room. It depends on what you want to achieve.

One thing you must consider is, if you are going to do art prints from your work, how much clarity you are going to have if the image is small. Some people may not want to buy a large art print. So if they were to buy a small print of your scene, how clearly will they be able to see the different elements of the scene?