The What and How of Fiberglass, Kevlar and Carbon 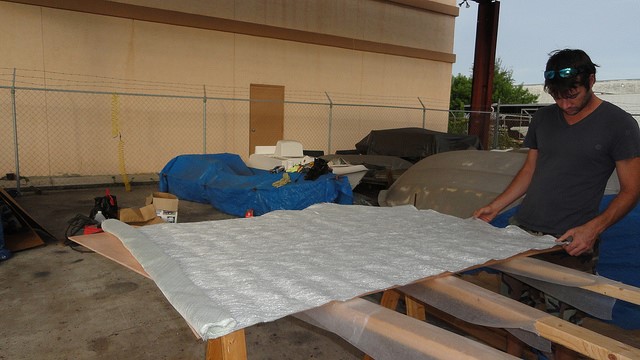 What are the qualities and properties of Fiberglass, Kevlar and Carbon. In what way do they have similar and differing properties and how does this impact their use in manufacturing.

Ordinary glass was made by the ancient Phoenicians and Egyptians so they were the first to also pull this material into small fibres that were used then mostly for decorative purposes. Some millennia later in 1870, a chap named John Player used a steam jet process to mass produce glass strands into what was called mineral wool’ which was used for insulation.  This is a property it is still used for today as it’s very effective. It was mainly the heat and cold, protection and retention qualities of fiberglass that it was used for until the fiberglass was combined with polyester resin that the Germans had developed and the British stole the secrets of during the war. The Americans quickly turned this new material to use in aircraft production by 1942 during the war, and the British found an excellent use for it to house the secret radar equipment they were developing. Today fiberglass is used to create almost anything and everything from a bathtub to a boat to a shower tap or its traditional use in insulation to keep out the cold and keep the warm in. Fiberglass production techniques have improved over the years but it is still essentially a messy process to create unique forms from the fibres and the polymer resins.

Kevlar is the brand name for synthetic fibre Poly-paraphenylene terephthalamide. It was created by a Dupont scientist Stephanie Kwolek in 1964 while she was looking for a lightweight material to use in tires. The polymers she and her team were working on formed liquid crystals during solution stage and this had never been seen before so Kwolek urged the lab technician to try spinning it, and they found that unlike Nylon, the fibres didn’t break. They both realized the significance of this and a whole new field of polymer chemistry arose as Kevlar’s properties are unusually advantageous indeed.

It is five times the tensile strength of steel and is used most famously in bullet proof protection clothing such as vests and body armour. It can be used as a substitute for Teflon due to its high resistance to heat and has found uses in audio equipment, high end NIKE training shoes, Motorola Cellphone rear covers due to its low interference with radio signals, and as an inner lining for some bicycle tires. Tennis rackets are frequently strung with Kevlar and it is often spun into cable and rope for use in environments where extra strength and resistance to heat and cold is needed.

Like Kevlar, Carbon Fibre is a composite material but unlike the long running polymer chains in Kevlar, carbon fibre is technically a cloth that is woven from strands of graphite. By laying the carbon fibre strands over a mould and then pasting a super tough epoxy resin over the strands a chequered pattern occurs which has very desirable qualities for strength and toughness. Carbon fibre cloth is a miracle material but for different reasons than Kevlar. It is much more flexible if that is the desired quality during the manufacturing process and this leads to a dissipation of energy under impact. Carbon fibre is also incredibly light because the strands are made from a low density material that can be produced at very low thicknesses. We often find this material used in light aircraft and racing car bodies as it can break out of place while retaining its structural integrity. The strength of both Kevlar and Carbon fibre is substantial but in differing ways. The rigidity of Kevlar is very strong indeed but once it reaches its maximum pressure point it will buckle very rapidly, whereas carbon fibre will hold its shape, is less resistant to piercings and is mostly unaffected by very high temperatures.

There are two types of carbon fibre to grasp its full utility, there’s the woven carbon filament or the carbon fibre reinforced polymer that is used in aerospace and formula one car applications. The loose carbon fibre filament is sometimes known as carbon graphite, graphite fibre or just plain CF and can be combined or mixed with other materials such as plastic resin to form a composite. It is among one of the highest strength to ratio materials on the planet.