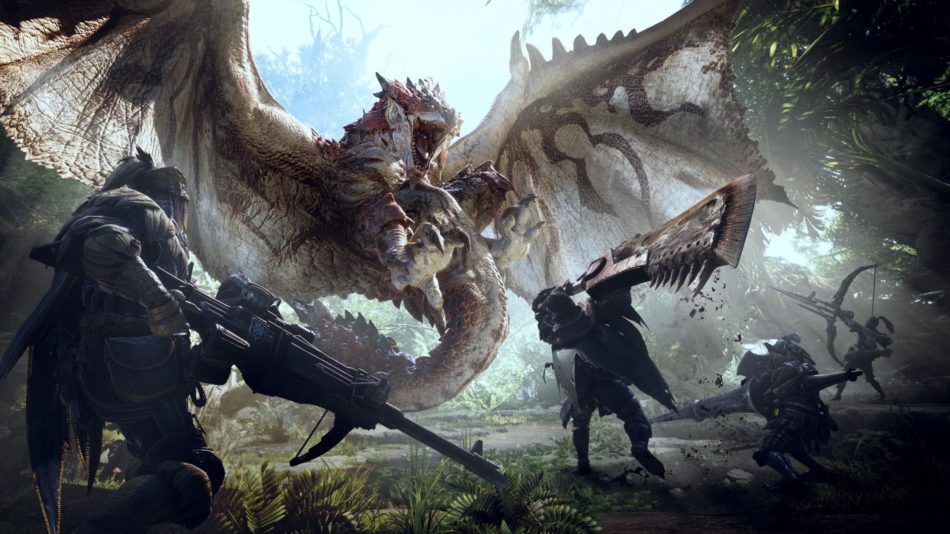 You assume the role of a Hunter who is tasked by the ‘Research Commission’ to hunt down large monsters for experimental purposes. The type of equipment at your disposal determines your character’s strength since you do not have any intrinsic attributes. When it comes to weapons, there is a large arsenal for you to choose from. There are 14 weapon types, each with its unique set of moves, combos, and animations.

As for monsters, you can expect to encounter a whole lot of them during the course of the game. Each of these monsters brings new set of challenges, unique weaknesses, and require careful planning before you take them on. According to some reports, there will be around 40 monsters in the game.

Monster Hunter: World comes in three editions i.e. Standard Edition, Deluxe Edition, and Collector’s Edition. Both Deluxe Edition and Collector’s Edition contain several added items that, according to Capcom, will become available for purchase somewhere later down the road. Apart from these, there is another edition called Rathalos Edition which initially was only available in Japan but now has made its way to France for 450€.

The game’s Producer, Ryozo Tsujimoto, also took a jab at the recent issue of microtransactions in video games. According to Tsujimoto, MHW promotes the idea of teamwork among 4 players. The idea of a player having a better weapon just because he/she paid for it as opposed to someone who worked hard to acquire it is absurd at best.

The game is currently sitting at 91 on Metacritic with critics appreciating it for its accessibility and gameplay mechanics that stay true to their core. It has been heralded as one of the best Monster Hunter games out there – something that both veterans and newcomers would enjoy getting into. From the looks of it, the game will take around 50-60 hours to complete and will continue to offer replay value after the story’s completion.

Developed and published by Capcom, Monster Hunter: World is scheduled to release tomorrow on Xbox One and Playstation 4. The game is also planned to arrive on PC but the studio pushed the launch window to Autumn 2018 to ensure that PC players get the best possible experience. As for Nintendo Switch, the Game Directors Kaname Fujiko and Yuya Tokuda have confirmed that they currently do not have any plans for Nintendo Switch.

Looking forward to trying out Monster Hunter: World? Let us know in the comments section below!