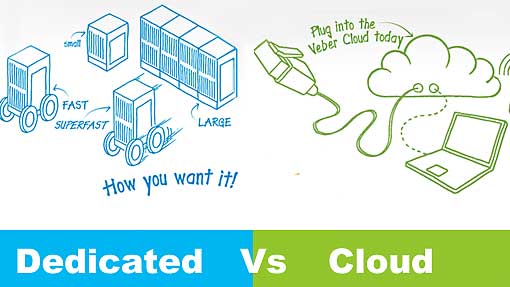 Tech and Trends:- The cloud industry is just beginning to flourish, yet the competition has now risen between cloud hosting and dedicated servers. The options are now considered as popular topic to discuss, especially when it is about which of these two is better. Even forums discussing these two have increasingly sprouted in the past years. But the question still remains – “what is really the difference between these two and which one is better?”

The service may still be in its early years. However, it shows a high potential of being considered as sole solution to data storage as well hosting in the coming years. Cloud computing server is being outsourced as well as run using virtualized software. How it functions is similar to a dedicated server. The only difference is that users have no idea which hardware is currently being run by the server.

It is a traditional means of hosting almost anything and still remains highly recommended these days even with the presence of cloud computing. It can host a range of stuff, including web apps and highly-interactive websites. Dedicated server follows a basic protocol which involves the user either buying or leasing a server from the provider and paying the charges on a monthly basis. The Differences and Benefits of Dedicated Servers and Cloud Based On:

Both hosting servers deliver the same level of performance. Dedicated servers can be as quick as the cloud server. The thing is there are “dirty” instances in the case of dedicated servers. It is normal for situations like a computer getting slow to happen. The case of this happening is due to the many temp files and program files that run on the server. The case is also the similar to cloud server. However, with cloud server, the user can simply switch and leave the issue behind. Users are able to clean their machine without the risk of interrupting things. They can also simply move back to that machine with ease, which is not possible with dedicated servers.

This aspect is considered as the biggest difference between the two. With cloud server, users can feel safe that even if one server crashed down, they can still have access to their stored data and retrieve it. The website or web apps also do not get affected. The worst that can happen in such cases is experiencing performance issues, but a website or web app won’t totally crash down.

Cost is another big difference between dedicated servers and cloud servers. With dedicated servers, the cost depends on the packages users choose. It can range from $50 to $1,000, with the former not guaranteed to be much useful. As for cloud, the expenses that can be incurred depend on how much the users have used. It is advantageous to use cloud since users are only charged for what was used.

From the information provided, it is guaranteed that you now have an idea about which of these two is much better. This can make the decision-making easier for you.