A “Quick” Look at “Skype Qik 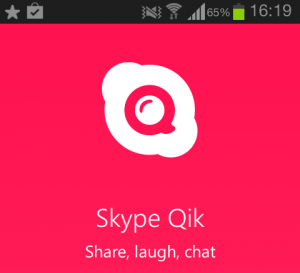 Tech and Trends:- The recently launched Skype Qik is witnessed as an attempt from Microsoft’s part to keep up to the latest trends in the industry. One of the most notable changes, in this regard, can be traced in the shift from the desktop to mobiles. Microsoft is actually cashing in on the popularity of Skype along with Qik, its mobile video streaming startup (which it acquired in the year 2011).

After Qik was acquired by Skype, the latter’s team had been working relentlessly on new technologies for the Skype Qik app. While Qik, earlier, was all about mobile video messages, Skype Qik is more about video voicemail.

As already mentioned above— one of the major trends shaping the existing web sphere is the shift to mobile from desktop. More of the Skype users are on mobile today. Video calls aren’t scheduled as they were earlier since they have only emerged as way easier than before, where you can conduct elaborate video meetings even on the move. There are several companies which have greatly cashed in on this overwhelming shift. Apple’s Facetime, Google’s Hangouts and Facebook’s messenger are all in the queue. They had been released way ahead of Qik and Microsoft is no mood to lag behind, any further. And thus, in its attempt to join the bandwagon , Microsoft has left no stone unturned to ride high on the snap-chat popularized fad, with Qik. Skype’s director of mobile, Piero Sierra, in his interview with The Verge, clearly indicated that they are “responding to the big trends in the industry.”

It is relatively easy to use Qik. You can just tap the Qik (Skype) icon (With a pinkish shade). You are then led to a home screen where you can view the entire list of your video messages (of course, the recent ones!). There is also a record button.

When it comes to asynchronous video chat, none of the options, which had earlier been introduced– had succeeded to establish themselves as a real effective standard. So Skype is definitely looking to build on an undisputed presence in the market with Qik. However, those, who are looking to download skype just in order to avail Qik by default, should read on further. Please know for a fact that Skype had not really worked on the establishment of Qik, right from the ground up. So, in order to install Qik, you necessarily will not have to create a Skype account. Rather, you should concentrate o installing the separate Qik account designed for Windows, iOS and Android. You do not have to create an account but it will be linked to your mobile number.

The target audience for Qik is definitely the younger generation, who are not in favor of using the boring old Skype. As such, there are many, who believe, that Qik is redundant— especially when it’s tied to the “age-old” Skype. After all, users can already record 3 minute long video chats on Skype. In short, they are simply not in favor of the trendy snap chat being tied to the old legacy (Skype)!